Dissing of America- Treating Obama as a Failed Leader

From yesterdays WSJ, Mr. Stephen's speaks with a rare lucidity...

The Dissing of the President

The world is treating Obama like another failed American leader.

I've never liked the word diss—not as a verb, much less as a noun. But watching theObama administration get the diss treatment the world over, week-in, week-out, I'm beginning to see its uses.

Diss: On Sunday, Bloomberg reported that Hasan Rouhani named Hamid Aboutalebi to serve as the ambassador to the United Nations. Mr. Rouhani is the Iranian president the West keeps insisting is a "moderate," mounting evidence to the contrary notwithstanding. Mr. Aboutalebi was one of the students who seized the U.S. Embassy in Tehran in 1979.

Here's the kicker: The State Department—the very institution whose diplomats were held hostage and brutalized for 444 days—will have to approve his visa to come to New York. Considering how desperate John Kerry is not to spoil the nuclear mood music with Tehran, the department probably will.

Diss: On Friday, Vladimir Putin called President Obama to discuss a resolution to the crisis in Ukraine. The Russian president "drew Barack Obama's attention to continued rampage of extremists who are committing acts of intimidation towards peaceful residents," according to the Kremlin, which, as in Soviet days, no longer bothers distinguishing diplomatic communiqués from crass propaganda. 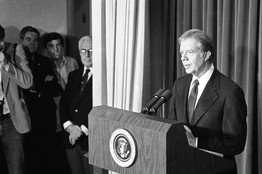 Mr. Kerry was immediately dispatched to Paris to meet with Sergei Lavrov, his Russian counterpart. Mr. Lavrov—who knows a one-for-me, one-for-you, one-for-me deal when he sees it—is hinting that Russia will graciously not invade Ukraine provided Washington and Moscow shove "constitutional reforms" favorable to the Kremlin down Kiev's throat. And regarding the invasion that brought the crisis about: "Mr. Kerry on Sunday didn't mention Crimea during his remarks," reports The Wall Street Journal, "giving the impression that the U.S. has largely given up reversing the region's absorption into Russia."

Diss: "If your image is feebleness, it doesn't pay in the world," Moshe Ya'alon, Israel's defense minister, said last month at Tel Aviv University. "At some stage, the United States entered into negotiations with them [the Iranians], and unhappily, when it comes to negotiating at a Persian bazaar, the Iranians were better."

The administration later demanded an apology from Mr. Ya'alon, which he dutifully delivered. But this isn't the first time he's dissed the administration. In January, he called Mr. Kerry"obsessive and messianic," adding that "the only thing that can save us is if Kerry wins the Nobel Prize and leaves us alone."

Diss: "It seems to me that some kind of joker wrote the U.S. president's order :-)". That was what Russian Deputy Prime Minister Dmitry Rogozin tweeted after learning last month that the Obama administration had sanctioned him for his role in the invasion of Ukraine.

Diss: In March, Iranian Gen. Masoud Jazayeri offered his view of Mr. Obama's threat to use military force against Iran if negotiations fail. "The low-IQ U.S. President and his country's Secretary of State John Kerry speak of the effectiveness of 'the U.S. options on the table' on Iran while this phrase is mocked at and has become a joke among the Iranian nation, especially the children."

Diss: In late December, Mr. Obama warned Congress that he would veto legislation to impose new sanctions on Iran if the Islamic Republic violated its nuclear commitments. It was essential, White House Press Secretary Jay Carney said, to do nothing that "will undermine our efforts to achieve a peaceful resolution."

A few weeks later, Iranian Foreign Minister Mohammad Javad Zarif laid a wreath at the tomb of Imad Mughniyeh, mastermind of the 1983 bombing of the U.S. Marine barracks in Beirut, the 1985 hijacking of TWA 847 and countless other acts of international terrorism. Apparently Mr. Zarif didn't much fear undermining efforts to achieve a peaceful resolution.

Diss: In December, Turkish Prime Minister Recep Tayyip Erdogan, under fire for a corruption scandal, unleashed a media campaign to impugn U.S. Ambassador Francis Ricciardone as a member of a dark conspiracy to destabilize the government in Ankara. This is the same Mr. Erdogan whose regime Mr. Ricciardone praised for "great development in democratic structure." It's also the same Mr. Erdogan about whom Mr. Obama once said he had formed "bonds of trust."

Diss: "Rather than challenging the Syrian and Iranian governments, some of our Western partners have refused to take much-needed action against them," warned Saudi Arabia's ambassador to the U.K. late last year. "The foreign policy choices being made in some Western capitals risk the stability of the region and, potentially, the security of the whole Arab world. This means the Kingdom of Saudi Arabia has no choice but to become more assertive in international affairs."

This would have been a diss were it whispered in the corridor of a foreign chancellery. The ambassador published it as an op-ed in the New York Times. NYT +2.51%

All this in just the past four months. And all so reminiscent of the contempt the world showed for Jimmy Carter in the waning days of his failed presidency. The trouble for us is that the current presidency has more than 1,000 days to go.